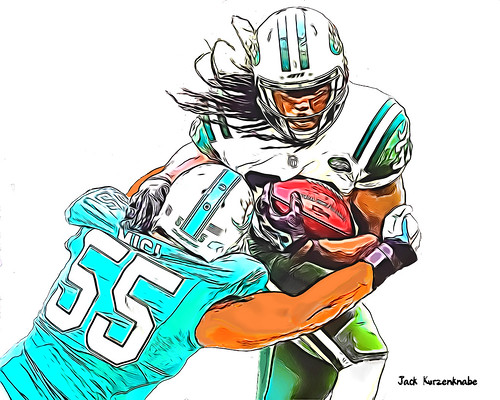 Is it just me or is the New York Jets front office content with bringing in old and past-their-prime running backs? In looking over the current roster one of the big offseason signings is Matt Forte. Yes, he was a good running back with the Chicago Bears years ago but he’s now 30 years old!

I’m not saying Forte won’t have some productive games but how much should we expect from him? He’s coming off a career low of 898 yards in 2015 having played only 13 games. It seems it might be all downhill from here. Did I mention he’s 30?

He isn’t the first old back New York has acquired. I recall another former Bear the Jets signed: Thomas Jones. In 2007, the Jets traded for Jones, aged 29 at the time, who did have thousand-yard rushing seasons but I never stopped worrying if his body would break down. In 2009, under Rex Ryan’s first year of a run focused offense, Jones rushed for a career high 1,402 yards.

An impressive feat for a 31 year old but it was never going to be continue further. The Jets did not resign Jones in 2010 but somehow felt that signing a 30 year old LaDainian Tomlinson would  be ideal for a “ground and pound” offense. I admired Tomlinson’s previous seasons but I did wonder if he had anything left in the tank. Surprisingly, he did rush for just under a thousand yards his first season with the Jets.

Why are the Jets so dependent on old running backs? Aren’t they the ones that take the most beating? Doesn’t the body slow down with age? And isn’t speed particularly important for the running back position?

After Tomlinson’s last season with the Jets in 2011, I was relieved to see that the primary backs were players in their mid 20’s: Chris Ivory and Shonn Greene. Compared to previous seasons, these backs seemed full of youth and energy. And for a couple of years I was led to believe that old backs were a thing of the past.

Oh, how wrong I was.

In 2014 the Jets signed Chris Johnson at the age of 28. I’ll admit that I was optimistic that the Jets would get the thousand-yard-rushing-Johnson. I figured he was still young and might replicate Tomlinson’s productivity when he came over from San Diego. Instead Johnson only rushed for 663 yards with one rushing touchdown.

But this trend of the Jets signing these old backs didn’t just start out of nowhere. I think I can place its start on one certain player named Curtis Martin. Martin joined the Jets at the age of 25 after playing three seasons with the New England Patriots. Martin rushed for over a thousand yards for 7 straight seasons and retired at the age 33, sitting out the 2006 season due to an injury.

The Jets, I believe, got this faulty optimism from the Martin that they can sign an established running back and have him be productive until the age of 32. The Jets front office must believe that a running back over 30 has no downside. If Curtis Martin rushed for 1,697 yards at age 31 then everyone else should be able to as well. This is the Curtis Martin fallacy the Jets seem to hold on to. The gift and curse Martin’s legacy left behind.

Let us see how Matt Forte’s season plays out. I’m hoping for the best but I know the Jets’ history.

Why the Jets should have second doubts about Matt Forte

Should the Jets have signed Fitzpatrick back to the team?