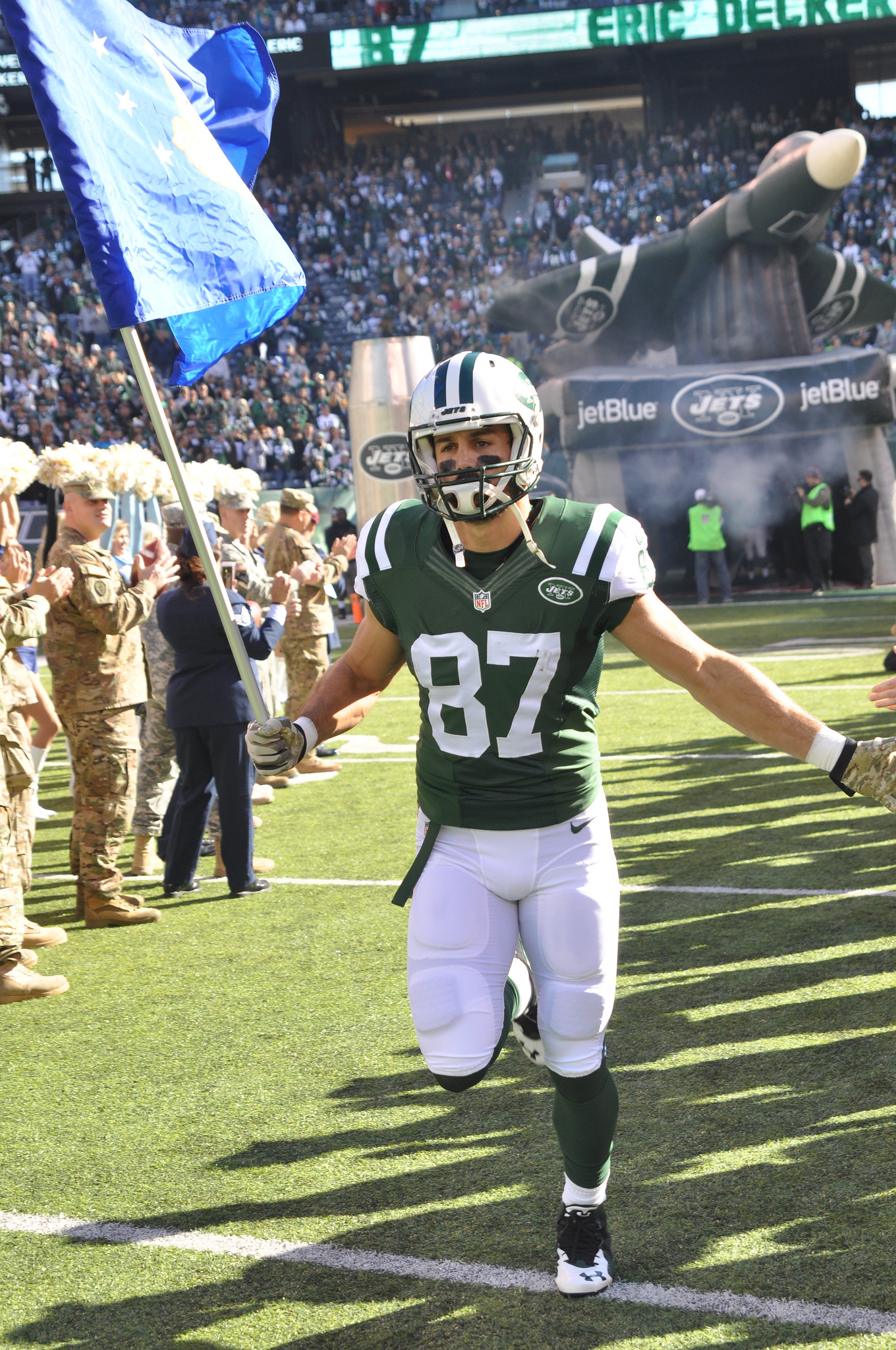 In a close defeat in NFL Week 8, the Jets lost to Atlanta Falcons due to sloppy special teams. New York’s next opponent was Buffalo at MetLife Stadium. In Week 1, LeSean McCoy ran all over the defense as the Bills won 21-12. In this rematch on Thursday Night Football, would Gang Green falter again versus their AFC East division rival in Week 9?

Back in Week 1, LeSean McCoy carried the Bills on his back and shredded the Jets defense. He had 22 carries for 110 yards and had several rushes of more than 20 yards. This Thursday night, however, would be different. Leonard Williams and the defensive line stacked the line of scrimmage while Darron Lee and the linebackers broke through to tackle LeSean behind the offensive line. Against New York’s swarming defense, McCoy finished with 25 yards on 12 carries, a measly 2.1 average per carry. (Adding to his misery was that one of carries was a long of 25 yards, which only improved his 2.1 average; otherwise, his night could have been much worse). With Buffalo’s running back under control, the defense turned its attention to the other ball carrier of their offense: the quarterback.

With McCoy behind him ineffective in getting yards on early downs, Tyrod Taylor constantly faced 3rd down and long distances on Buffalo’s possessions. The QB was forced to throw more attempts than usual due to the struggling run game. As a result, he often had to drop back to pass, which gave more opportunities for Gang Green to pass rush him.

Coming into this game, the Jets had 11 total sacks. They were one of the worst teams in the NFL in bringing down the QB over the 8 week stretch. Against the Bills, New York had already sacked Tyrod 5 times in the 1st half. At the end of 4 quarters, the defense had brought him to the ground 7 times for 41 yards. Four different defensive linemen and three linebackers each sacked Taylor, with Muhammad Wilkerson getting his 1st sack in 2017. Tyrod felt the pressure in his face all night long.

The Jets forced the Bills to commit turnovers. With one minute remaining in the 2nd quarter, Taylor threw the ball to Jordan Matthews on 3rd down & 7. He caught the pass but fumbled it at the Jets 31 yard line. Cornerback Juston Burris recovered it, which prevented Buffalo from scoring just before halftime against New York’s 10-7 lead.

The Jets were leading 24-7 when another impact play occurred near the 50 yard line with 2 minutes left in the 3rd quarter. Bills tight end Nick O’Leary jumped high to catch a pass on 3rd down and 10. He fell to the ground at New York’s 40 yard line without a defender touching him to signal that he had been tackled. As he got to his feet, rookie safeties Jamal Adams and Marcus Maye stripped the ball out away from him. Adams jumped on the loose ball, which prevented another Buffalo drive from scoring points in Jets territory.

The next turnover proved to be costly. At the start of the 4th quarter, Taylor snapped the ball on 3rd down and 10 from the Bills 20 yard line. As the pocket broke down, he stepped up and escaped the arm tackle of Leonard Williams. As Tyrod scrambled past the line of scrimmage for the 1st down, linebacker Jordan Jenkins came from behind and hit the QB’s arm, causing the ball to come out. Linebacker Demario Davis picked up the fumble and was soon tackled by RB Michael Tolbert at Buffalo’s 4 yard line. This fumble and the 6th sack on Taylor led to a Matt Forte TD, putting the Jets ahead 31-7 over Buffalo in the final quarter.

Gang Green completely dominated Buffalo on the defensive side of the ball. The stout run defense against McCoy turned the Bills into a one dimensional passing offense. This brought more opportunities for Taylor to get pressured every time he dropped back to pass the football, which resulted in the QB getting sacked 7 times by various Jets players.

And the statistic that always determines whether a team loses a game is the turnover battle, with New York recovering 3 Bills fumbles. Winning the turnovers allowed the Jets offense to begin their drive on enemy territory and prevented Buffalo from scoring points near New York’s endzone.

With such a defensive effort against their opponent, Gang Green led 34-7 with 4 minutes remaining in the game until Buffalo scored two late meaningless touchdowns in garbage time for the final score of 34-21. The Jets record improved to 4-5 while the Bills fell to 5-3.